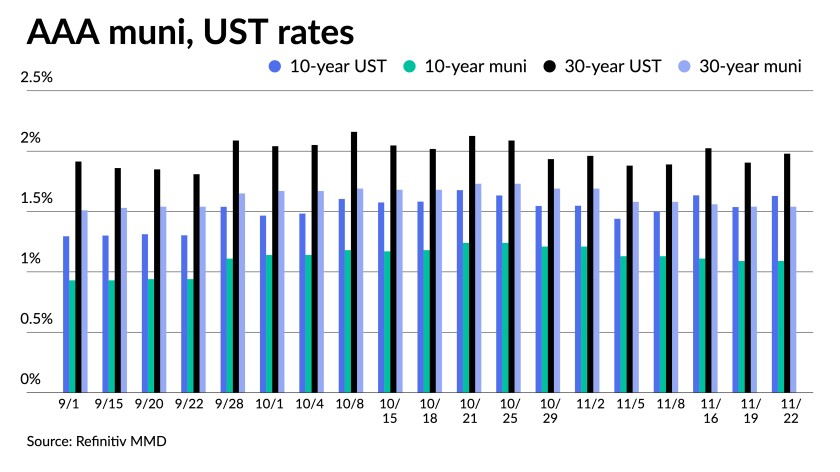 Since Powell is seen “as slightly less dovish than [Lael] Brainard, more rate hikes and more immediacy of those hikes is making its way into the yield curve,” said Jake Remley, senior portfolio manager at institutional investment manager Income Research and Management. “While rising rates will hurt bonds’ mark-to-market, higher yields, both nominal and real, will attract new capital into the asset class.”

Triple-A benchmark scales were mostly left unchanged, save for a basis point cut in spots on some yield curves. The UST 2- and 5-year hit year-highs at 0.59% and 1.313% with the 10-, 20- and 30-year yields climbing seven to eight basis points from Friday.

“Inflation had been dismissed as transitory until now, but the new buzz word for inflation is ‘sticky.’ We expect prices will remain range-bound through the end of this calendar year, but in 2022 the Fed must show it is committed to snuffing out inflation,” Nuveen said. “Otherwise, rates may begin to increase. We expect municipal bonds to remain well-bid through the rest of this year. The market survived the outsized new-issue supply, and now we await the December 1 and January 1 coupon payments.”

This week will be mostly about secondary flows given that the majority of larger issuance was advanced earlier in the month, said Kim Olsan, senior vice president at FHN Financial.

“With just a few remaining weeks in the year, the market will be more focused on fundamentals as planning for 2022 begins,” she said.

Olsan outlined various factors the market faces, including redemptions, fund flows and bids wanted/secondary volumes, which she said will be the primary focus.

December estimates for calls and maturities total $32 billion, about 10% less than this year’s average monthly volume. In the months when the redemption figure reached $35 billion or more — June, July and August — generic index performance reached an aggregate 0.70%, she said.

“A usual 2-3 week lull in supply at year end and into early January can create a strong December return. The caveat is in those years when a tangential event occurred — election (2016), legislation (2017) or credit (2010) — at the turn of the year to throw caution into the mix,” she said. “With the Build Back Better plan set to go to the Senate for debate, any resolution that involves a change in tax rates would have likely consequences for the market.”

Fund flows have seen an uptick in November. Historically, she said, during the fourth quarter, the weekly average has fallen to about $622 million.

“The inherent demand built into the tax-exempt side of the market that originates from mutual funds is an integral piece to the balance of supply and demand. However, recent performance in the UST market is indicative of an increase in taxable muni issuance (i.e. refundings) and a potential drop in tax-exempt new-money financings,” she said. “If that trend develops, fund flows could be held to smaller totals and not negatively impact generic rates.”

The interplay of higher selling into year end and absorption levels has a direct bearing on yield direction, Olsan said.

“Daily bid list figures have grown 13% this month from the 2021 average and current secondary offering totals are running about 10% above the yearly number,” she said. “A corollary number is dealer inventory carry, which has also increased by 37% from the prior 10 months’ level ($13 billion as Nov. 10).

Just how much supply develops during December “will have a direct bearing on these metrics and ultimately yield direction. One aspect to higher current rates is that issuance from January-February and July-August of this year would suggest tax-loss swap opportunities.”

Treasuries sold off and equities were mixed.

It’s Powell
The nomination of Jerome Powell to head the Federal Reserve and Lael Brainard to be vice chair establishes continuity for now, although the likelihood is the Fed will become more dovish as President Biden fills vacant seats on the Board.

“The most significant impact from today’s announcement in our view comes from the likely loss of Governor [Richard] Clarida from the FOMC who is one of only two career economists, along with Chris Waller, on the Board,” said Wilmington Trust Economist Luke Tilley.

“The loss of Clarida, elevation of Brainard, and three open seats for Biden to fill likely tilts slightly dovish for monetary policy in 2022,” he continued. And with Clarida gone, it “probably elevates the voices of Waller, the Board staff, and Reserve Bank presidents on the FOMC.”

While formally Brainard’s only responsibility as vice chair is to fill in if Powell is absent, “informally, the position likely carries some weight and stature with the staff of the board and members of the FOMC,” Tilley said.

This was “the right move,” said John Luke Tyner, fixed income analyst at Aptus Capital Advisors. “Markets made their statement of wanting to see the Fed do its job, i.e., focusing on addressing monetary policy, employment, and inflation rather than political agendas such as climate change and income inequality.”

With Powell remaining in charge, data will determine the pace of taper, he said, with a speed up if inflation remains elevated and liftoff in June.

“The market believes this action will keep the Fed in control of inflation,” Tyner said. “While the market is expecting a more hawkish response to current inflation, time will tell if it will be enough, as Powell is well established in the dovish camp of FOMC policy.”

But “more aggressive progressives” could be chosen for the three open seats, he said.

The financial market’s reaction suggested their approval, he said.

With Powell and Brainard likely to win Senate confirmation, Jordan Jackson, global market strategist at J.P. Morgan Asset Management said, this removes “a layer of uncertainty … at a time when the Fed is just beginning to normalize policy.”

And while “markets cheered the president’s decision,” Jackson said, “given it seemingly preserves the status quo, however, it should be recognized that Fed leadership is still likely to be reshaped in the next year.”

Nominees are expected to push diversity and “tougher bank regulation,” he said. “As a result, we would expect the yield curve to steepen as rate hikes are pushed out. With that said, policy is arguably already too dovish and it’s highly unlikely the committee will deviate from its tapering timeline outlined at its last policy meeting.”

With the market focused on inflation, “Brainard would have been more difficult for the market to digest as chair,” said Jeff Klingelhofer, co-head of investments Thornburg Investment Management. “Her appointment to vice chair offers Democrats a ballast to Powell and a likely regulatory win.”

The two nominations, Morgan Stanley researchers said, “provides like-minded leadership over the next four years.” Biden plans to name nominees for the vacant spots in December. “Turnover at the Board of Governors will also be matched with a reshuffling of FOMC voters and regional Fed presidents, such as with the incoming leadership replacements at the Dallas and Boston Fed,” Morgan Stanley said.

“In all, we expect FOMC voters to skew more dovish in 2022,” they said. Taper should continue on schedule, with a ramp up, if needed. They see liftoff in the first quarter of 2023.

Norbert Michel, Cato vice president and director of the Center for Monetary and Financial Alternatives, said it wouldn’t have mattered which of those two Biden chose to lead the Fed. “The Fed moves slowly and deliberately, rarely changing course without broad agreement among the Board and the rest of the Open Market Committee.”

The market will need to decide how these and other changes will alter the taper and liftoff, said Phil Orlando, chief equity market strategist at Federated Hermes. “Given the surge in sustainable inflation, will the new board follow through on the old Fed’s policy decision to taper bond-buying now and eventually raise interest rates, or will they allow the Fed to get further behind the inflation curve, which may require a potentially more draconian Volker-esque policy response somewhere down the road, to get the raging inflation genie back in the bottle?”

In data released Monday, existing home sales grew 0.8% in October to a seasonally adjusted annual rate of 6.34 million, above the 6.20 million projected by economists polled by IFR Markets. Sales were off 5.8% from a year ago.

Infrastructure Act’s bridge money begins to flow to states
Here’s how to prepare if you want to buy a home in this competitive market
Commuting Choices Helping Lure Renters To South Amboy, New Jersey
Manhattan rents were the highest ever for December
Home Sales Post Largest Monthly Decline Since Pandemic Onset