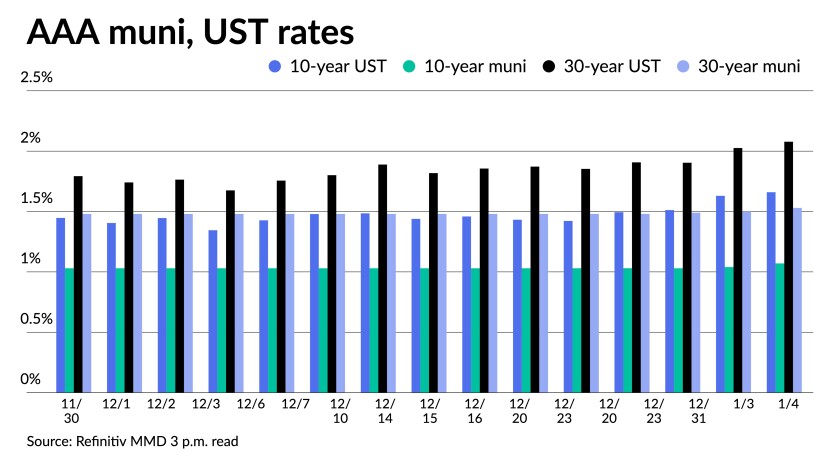 Selling pressure picked up and municipals showed some weakness for the first time since November on Tuesday following two days of rising U.S. Treasuries, but the asset class still outperformed that market’s double-digit moves to higher yields.

While Treasury rates have been expected to rise in 2022, Jeff Lipton, managing director of credit research at Oppenheimer Inc., said he expects economic and inflationary prospects to fuel additional Treasury market volatility in 2022, with a rise toward a 1.75% 10-year benchmark rate becoming more likely.

And while munis have shown on Tuesday they might not go unscathed by the increasing volatility in UST, Lipton said the month may bring about a more typical “January Effect” with lighter weekly calendars as extended pent-up supply that came about toward the end of 2021 coupled with growing reinvestment needs from maturing securities and bond redemptions.

Lipton said performance for January is beginning in a good place. Technicals are holding up well and the new-issue muni market should continue to struggle to meet near-term reinvestment demands.

“We should, however, reasonably expect to see a reduced pace of inflows at the very least, and a possible return to intermittent outflows with more volatility in 2022 would not be a shock,” Lipton said. “Investors should pay close attention to spread relationships, particularly if periods of extended mutual fund outflows come about with resultant higher ratios, presenting meaningful buying opportunities.

High-yield muni performance should be positive in 2022, but down year-over-year, he said. With a 7.77% return in 2021, muni high-yield outperformed and Lipton said there is little opportunity for additional performance in the high-yield category. They foresee a slowdown in 2022, Lipton said, given estimates that returns for some high-yield sectors may be less generous.

“Although there has been some noted variability in high-yield fund flows, we can expect to see continued strong demand in this space as long as credit spreads remain generally at compressed levels with high-yield fund flows decidedly positive at least through the early months of 2022,” he said. “High-yield investors are willing to take on heavier credit risk in order to book more compelling yield amid improving credit conditions.”

A lighter 2022 volume forecast
Lipton forecasts volume for 2022 between $450 billion to $460 billion, but the recently passed and signed infrastructure package could buoy muni issuance to some extent in 2022 and beyond as state and local issuers seek to leverage federal support. Oppenheimer’s projections are near the average for the industry.

He said muni volume for 2022 will be heavily influenced by: issuer perceptions of public health policy; the pipeline of critically needed bedrock financing; voter authorized bond referendums; available federal stimulus funding which could obviate the need for bond financing; the outlook for the economy in general and for muni credit specifically; and historically low-interest rates within a tighter monetary policy environment.

“Now that it appears unlikely that muni-friendly bond provisions and higher tax rates will become available for now, issuers have come in off from the sidelines and have entered the market to take advantage of still – low-interest rates,” Lipton said. “Such activity includes the marketing of taxable advance refundings, which in 2022 should continue to be subject to the direction of market rates and spread relationships.”

In 2022, the availability of taxable munis should increase their appeal to current tax-efficient investments, such as retirement accounts looking for alternative investment proxies, as well as international purchasers looking to diversify their portfolios and add above-average credit quality. This will most likely happen against a backdrop of global sovereign debt with low to negative yields, resulting in a reshaped muni buyer base.

“Taxable issuance has the potential to fall below the 20% threshold with a noted drop in taxable advance refundings as Treasury yields are likely to trend higher given growth prospects and tighter monetary policy and given that the universe of outstanding tax-exempt advance refundable candidates continues to narrow,” Lipton said.

If the supply of taxable munis becomes more limited, certain domestic institutional buyers, such as life insurance firms may perceive a diminished relative value play if taxable spreads narrow as a result.

Lower taxable muni volume can also be attributed to the use of financing alternatives such as forward-delivery bonds, private placements and the marketing of certain debt issued with corporate CUSIPs.