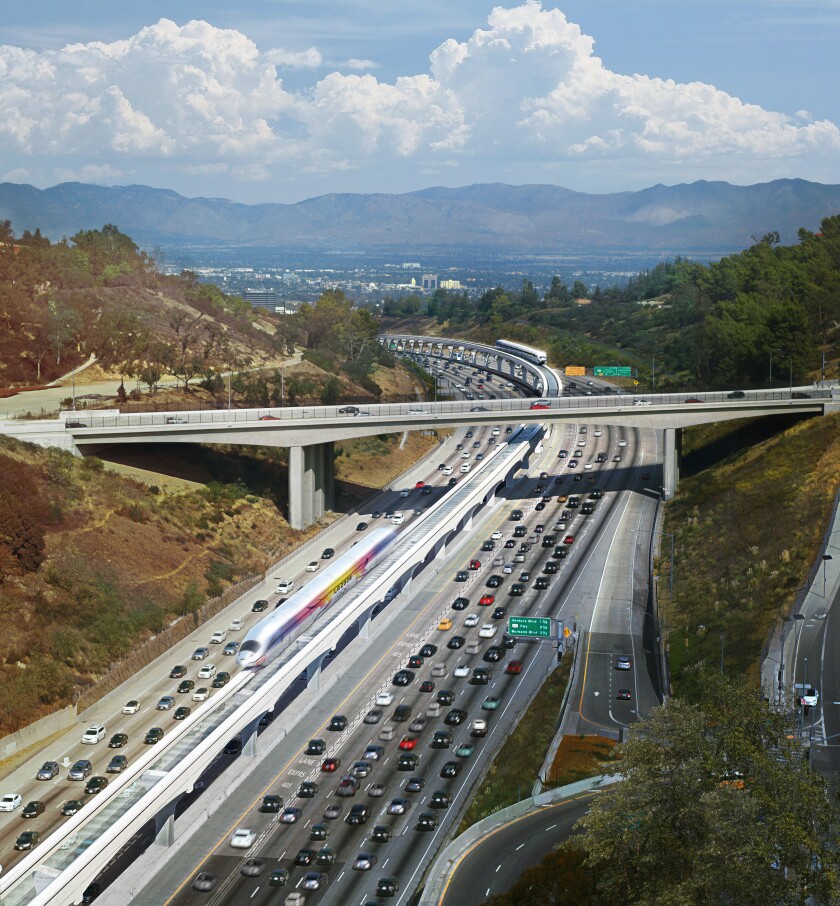 The Los Angeles County Metropolitan Transportation Authority’s long-planned, costly and complex rail line that would mark a number of firsts for a transit public private partnership is picking up speed.

The Sepulveda Transit Corridor is a proposed rail line connecting the San Fernando Valley with LA’s Westside across the Santa Monica Mountains and eventually Los Angeles International Airport. The corridor would be an alternative to Interstate 405, a 14-lane freeway that’s considered one of the most congested in the country. The agency is considering proposals for either a monorail or a heavy rail design, which would operate at least partly underground.

Estimates put the price tag for either option at around $10 billion. The completion date for the full line is 2057, though the agency hopes that using a public-private partnership could accelerate the timeline. Metro, which has been planning the project for at least 10 years, dubs it one of the most ambitious transit projects in the country and says it would reduce greenhouse emissions, connect residents with jobs, and offer a badly needed alternative to a car-dependent region.

The agency late last year launched the the environmental review phase and is taking public comments through next month.

Bonds will likely be floated at some point, and Metro officials said they also hope to tap funding in the newly passed Infrastructure Investment and Jobs Act.

The mega-project marks the first time that a U.S. transit agency has used a so-called progressive or pre-development agreement, or PDA. The agreement allows a government to bring in a private partner early to help design a project, identify risks and craft a budget while pursuing environmental reviews and approvals.

After the PDAs conclude, the agency will either issue an RFP for a full P3 or opt out of developing the project as a P3.

Although Metro is not required to pursue a P3, the agency says its goal is to work with the PDA teams to develop a project that can be built, operated and maintained by a private sector partner.

If developed as a P3, Sepulveda would mark only the third use of a nontraditional procurement project in U.S. transit. The other two were the Denver Eagle FasTracks Project and Maryland’s Purple Line light-rail project, both of which faced their share of delays and problems.

“There is pressure to show these P3 projects can be successful,” said Baruch Feigenbaum, senior managing director of transportation policy at Reason Foundation.

Metro’s CEO Phillip Washington, who left the agency last year, was considered a supporter of P3s and launched the agency’s Unsolicited Proposal policy, which asked private sector firms to send the agency ideas for various capital projects. That’s how Metro decided to do a PDA for the Sepulveda Pass, according to the agency.

“There’s not a lot of natural P3 advocates in the transit world,” Feigenbaum said. “So, this might be one of the few opportunities in the foreseeable future to get this type of project up and running.”

The P3 sector “is definitely watching the procurement because the project is very large and the question will be whether this goes well, because the other two didn’t go so well,” said John Medina, a senior analyst in Moody’s Investors Service Global Project & Infrastructure Finance Group. “People are looking for a model that works in transit.”

Over the last five years, Canada has embarked on several light rail transit projects, but those also have faced issues, Medina said. “You rarely find a rail project that hasn’t had any issues,” he said.

Sepulveda would be the agency’s first P3, although it’s considering the structure for two other projects, said Dave Sotero, Metro’s project spokesperson.

The agency is also considering a P3 for a “small portion” of the East San Fernando Valley Light Rail Transit Project and for the West Santa Ana Branch Corridor Project, which will be a light rail line serving southeast L.A. County, Sotero said.

“As Metro has the largest capital program in North America, we are carefully considering all potential project delivery methods, including P3s, for future projects,” he said.

If Sepulveda Pass is developed as a P3, the agency would likely use an availability payment structure as the project would not generate sufficient revenue to use the revenue-risk structure more common with tollway concessions, Feigenbaum said.

“Transit projects introduce more risk than we see in the highway sector,” he said.

The availability payments would likely be backed by Measure M sales tax revenue, he added.

The two private teams will provide cost estimates, constructability reviews and technical analyses as the project moves through the environmental review and approval processes.

The PDA is designed to help Metro avoid some risks as it embarks on the ambitious and complex project, Medina said. “It’s definitely going to result in a better risk allocation,” Medina said. “Now you can have those discussions before you hit a number, and you can go into it with that knowledge now rather than later.”

The project is funded in part by Measure M, a transportation sales tax measure approved by L.A. County voters in 2016. The plan includes $5.7 billion for the Valley-Westside segment of the corridor and another $3.8 billion for the extension to LAX.

While saying that borrowing would likely play a role in the project, Metro officials said it was too early for any specifics. The funding plan “includes assumptions of federal, state and local revenue,” Sotero said. That includes discretionary grants that Metro will need to secure through a competitive process. “The $1.2 trillion Infrastructure Investment and Jobs Act signed by President Biden could potentially supply funds for this project,” he said.

Under Measure M, the corridor is forecast to open to the Westside between 2033 to 2035. The extension to LAX would open by 2057.

The PDAs give the private teams the opportunity to enter into an Implementation Agreement for project delivery if that team’s proposal – after being refined throughout the PDA – is selected by Metro’s board as the so-called Locally Preferred Alternative. That decision is expected to be made around 2025. Metro would then issue an RFP for the P3 proposal.

The LA SkyRail Express proposal totals a baseline capital cost of $6.1 billion in 2020 dollars and $63 million a year of operating expenses in 2035 dollars. The team is developing three alternatives, all of which would feature one of the world’s few uses of the driverless, monorail technology, which would be constructed as an aerial alignment primarily along I-405. Metro has agreed to pay the team $63.6 million under the PDA to further develop the proposal.

Metro’s PDA with Sepulveda Transit Corridor Partners-Bechtel is for $69.9 million. The firm’s proposal totals $10.8 billion in capital costs and $118 million a year in operating expenses. Its heavy-rail alternatives would require extensive tunneling, as at least 60% of the ride would be underground.

Earnings season is the next big test for the market and value stocks in the week ahead
Land Meets Sea At The $15-Million Hawaii Home Of Windsurfer Great Robby Naish
Here’s how to prepare if you want to buy a home in this competitive market
AAOI and JBL are Aggressive Growth Rank Buys
Why this Cheap, High-Yield Dividend Stock is a ‘Strong Buy’