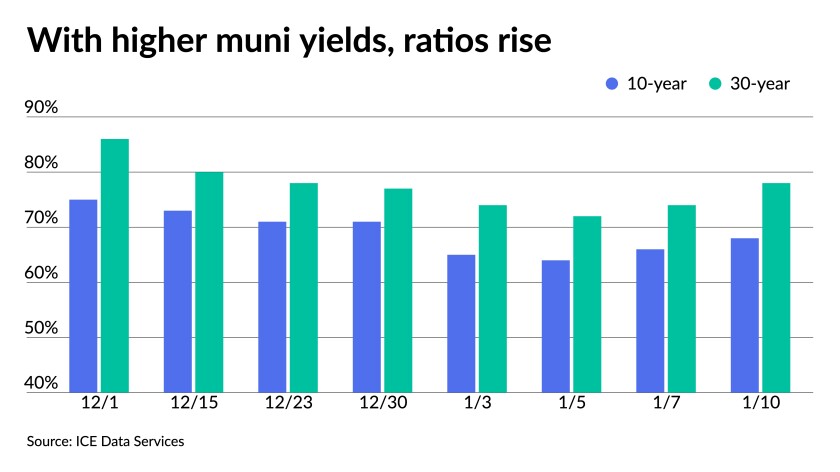 The mix of customer flows can lend insight into where strength of the bid-side lies, noted Kim Olsan, senior vice president at FHN Financial.

MSRB data for the first week of January shows dealer to customer sales versus buys was 1.20:1.00, “far lower than the last month of trading where the ratio was 1.86:1.00.”

“Some of that drop might be explained by cash waiting for the calendar build, but the broader context of rate risk could have other buyers in wait-and-see mode,” Olsan said.

Friday’s bid-wanteds totaled $590 million while Thursday’s were $1.04 billion, per Bloomberg data — only the third time in the last year the number has been over $1 billion, Olsan said.

“A surge in selling has stymied better performance — and now the market must reconcile just how much more correction will come,” she said.

Pressures from inflation concerns and broader rising rates kicked off another rocky start for munis in the second week of 2022, John Farawell, managing director and head of municipal trading at Roosevelt & Cross said Monday.

Farawell said “we won’t have a real feel for the market until the supply comes in,” typically in late January or in February.

“There is money on the sidelines and investors are being patient and waiting for that new-issue calendar,” he said.

Thirty-day visible supply sits at $10.33 billion while net negative supply is at $4.054 billion, per Bloomberg data.

Despite the continued rapid ascent of yields to begin 2022, “high-yield municipal yields have exhibited only 50% of the volatility, and much less in lower correlation sectors and credits,” according to Nuveen.

“At 255%, high yields are demonstrating a clear advantage over investment grade,” he said. “However, the drop in the ratio shows that credits on the cusp have been slower to react to rate increases.”

Treasuries rebounded late in the day while equities ended mixed.

All eyes on Fed
With Jerome Powell’s confirmation hearing set for Tuesday (despite expectations his nomination will be confirmed), the markets have a chance to hear from the Federal Reserve Board chair for the first time since the minutes of the last Federal Open Market Committee meeting were released.

Inflation and Omicron remain front and center as the Fed attempts to bring the economy in for a soft landing. The December consumer price index will be released on Wednesday and expectation are a 7.0% year-over-year rise.

“This will become political, both in that it will be weaponized against [Build Back Better], and raise the temperature in the confirmation hearings for Powell,” said Greg Staples, head of fixed income at DWS.

As for Omicron, he expects it will “quickly become endemic in the U.S., but” the worst will come by the middle of February. “It may slow Q1 GDP by .5%, but not much more,” Staples said.

“With policy tightening and [quantitative tightening] on the table, the Fed will actively use communication to signal the market, and get it to tighten conditions in advance of the Fed having to take full action,” he said. “This may already explain Treasury price action over the past week.”

And while many see inflation peaking by midyear, David Kelly, chief global strategist at JPMorgan Funds, expects core inflation, measured by the personal consumption expenditures index “only to fall from 4.7% today to about 3.0% by early 2023 and to stay at close to that level for as long as the current expansion continues.”

“This gets to the single most important issue for investors,” Kelly said. “If the Fed wants to tighten monetary policy to ward off inflation, it can only achieve its goal by achieving higher long-term interest rates. If it wants to raise long-term interest rates, it surely has the tools to do so with a hoard of $5.7 trillion in Treasuries and $2.6 trillion in mortgage-backed securities. It is, perhaps, this realization which caused 10-year Treasury yield to back up by 24 basis points last week and 10-year TIP yields to rise by 32 basis points.”

There are arguments for and against immediate Fed rate hikes, said Matt Dines, chief investment officer and co-founder of Build Asset Management. “Pairing restrictive monetary policy onto a struggling fiscal policy effort heightens risk and might actually make our problems worse in the long run,” he said. Also, rate hike could harm the global economy and international trade.

But or immediate Fed action would curb inflation, Dines said, “which could, for example, show up as slowing the rapid growth in home prices across the U.S., giving the American consumer some degree of much needed relief.”

It could also “alleviate the forces behind” wealth inequality, he added.

“The economy is too hot and the Fed is far behind the curve as witnessed by the high employee quit rate and high average hourly wages, far above productivity gains,” according to Sebastien Galy, senior macro strategist at Nordea Asset Management.

“As the Fed tightens liquidity by hiking three times this year, the speculation is now on when the runoff of the balance sheet starts, its intensity and the terminal rate for the Fed fund,” he said. The question becomes whether “Fed rate hikes will overshoot as they usually do.”

The terminal rate is expected to remain “very low,” Galy said, “with real interest rates expected around zero. The risk is that the Fed makes a mistake and raises expectations of the terminal rate to regain credibility. That will likely happen if evidence of second round wage inflation spirals widen out across the economy — this is increasingly likely in the next few months in a process that should intensify. A rapid runoff of the balance sheet would have the same effect, but is unlikely as it would overly commit the Fed.”

Look for a March rate hike, according to a BofA Global Research report, as they believe the Fed will reach or overshoot its maximum employment and inflation goals.

The Fed is behind the curve and will need to raise interest rates eight times by the end of 2023, said Ethan Harris, BofA head of global economics. “The Fed has taken notice and FOMC minutes revealed some members thought quantitative tightening (QT) could start soon after hikes.”

While it could happen by summer, BofA said, it expects a September QT announcement.

As for Treasuries, “the 10-year move was sharp” last week, noted Mark Cabana, BofA head of U.S. Rates Strategy. “Rates are near levels that we expect will create headwinds for risk assets, driving cash back into Treasuries.”

Fed Vice Chair Richard Clarida announced he will leave the Board on Jan. 14, two weeks before his term ends. President Joe Biden already appointed Lael Brainard for the vice chair seat. A confirmation hearing will be on Thursday.

The October numbers were originally reported as a 1.2% increase in inventories and 2.2% growth in sales.

Economists polled by IFR Markets expected a 1.2% increase in inventories.

The Conference Board’s December employment trends index climbed to 116.63 from 115.64 a month earlier, suggesting “job growth is likely to be strong in 2022,” said Gad Levanon, Head of The Conference Board Labor Markets Institute. “Nevertheless, in the very short term, job growth may be tepid as the fallout from Omicron continues.”

The Federal Reserve Bank of New York’s survey of consumer expectations found inflation expectations steady in December, holding at 6.0% over a one-year term and at 4.0% for a three-year period.

Christine Albano contributed to this report