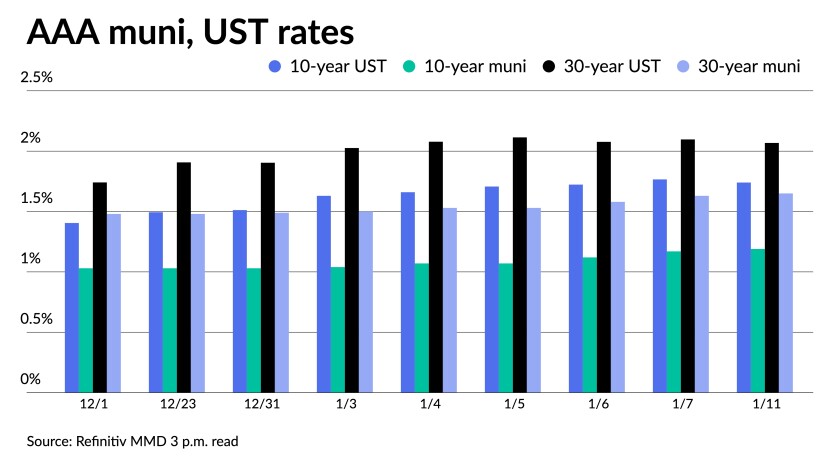 Municipal secondary selling pressure remained elevated on bonds inside 10 years while the larger primary got underway and deals saw bumps in repricings as U.S. Treasuries made small gains and equities rallied.

With the first day of a larger new-issue calendar, the primary took more of the focus Tuesday.

The New York City Transitional Finance Authority said Tuesday it will offer about $1.2 billion of future tax secured subordinate bonds next week. Proceeds will be used to fund capital projects.

Treasuries were steady while equities ended in the black.

Powell hearing
While other Federal Reserve officials have stated they would support a March liftoff, Federal Reserve Board Chair Jerome Powell would not commit to timing, stressing decisions would be data-based and the Fed will not allow inflation to become entrenched.

“We’re going to have to be humble and nimble,” Powell told the Senate banking committee during his nomination hearing. While he expects inflation to subside after midyear, he said, if it sticks around longer “monetary policy will have to adapt.”

He expects liftoff this year and balance sheet runoff but offered no specifics on timing. “Rate hikes will depend on data,” he said.

Answering questions about whether the Fed should be involved in addressing climate change or racial equity issues, Powell said, “We have to focus on the job Congress has given us.” He explained, “Climate is appropriate for us as an issue to the extent it fits within our existing mandates. The broader answer to climate change has to come from legislators and the private sector.”

The balance sheet runoff will start earlier this time, Powell said, since “the economy is in a completely different place than it was when we ended asset purchases the last time. Plus, with a bigger balance sheet than last time, he said, “the runoff can be faster.”

Officials are debating options and it could take up to four meetings to make a decision.

“Wall Street now has a better understanding on how the Fed will normalize policy and with the balance runoff likely taking up to four meetings,” said Edward Moya, senior market analyst at OANDA. “After Powell’s testimony, some investors feel they got the all-clear signal to buy the dip. The Fed’s window for tightening is complicated given inflation could finally peak during the summer and since they may not want to look political and be too aggressive removing accommodation so close to the midterm elections.”

While his statements could not be interpreted as “overly hawkish,” Moya said, Powell “paved the way for a lengthy debate over balance sheet reduction, with his normalization comments taking away some of the importance over [Wednesday]’s hot inflation report.”

The confirmation of Powell “would prove a welcome source of stability in an otherwise unstable world,” said Morning Consult Chief Economist John Leer. “Powell’s views of the economy are not particularly dogmatic, and he’s consistently voiced his commitment to following the data. … Additional experience from a veteran central banker like Powell would go a long way towards helping markets right now.”

Separately, Federal Reserve Bank of Kansas City President Esther George said, “With inflation running at close to a 40-year high, considerable momentum in demand growth and abundant signs and reports of labor market tightness, the current very accommodative stance of monetary policy is out of sync with the economic outlook.”

Even with tapering, she said, the balance sheet will continue to grow until the purchases end in March. “Removing accommodation will unavoidably be complicated by the use of multiple policy instruments — short-term rates and large-scale asset purchases — as it was during the last normalization cycle a decade ago,” George said. The size of the balance sheet and the long-term fed funds rate should be considered in the Fed’s decisions.

“My own preference would be to opt for running down the balance sheet earlier rather than later as we plot a path for removing monetary accommodation,” she said.

“Quantitative tightening will be announced in July, we think, brought forward from our previous base case of early 2023,” he said. “We expect monthly caps on balance sheet roll-off to start at $10 billion on both USTs and MBS ($20 billion total) and rise to $100 billion per month by December 2022 and target a balance sheet size of $6.2-6.9 trillion by end-2024.”

Virgin Galactic stock falls below debut price two years after going public
Activist hedge funds launched 89 campaigns in 2021. Here’s how they fared
Crypto exchange Gemini pushes into wealth management with acquisition of BITRIA
The Most Expensive U.S. Real Estate Sales For 2021
9 Things A Good Real Estate Agent Should Do For You