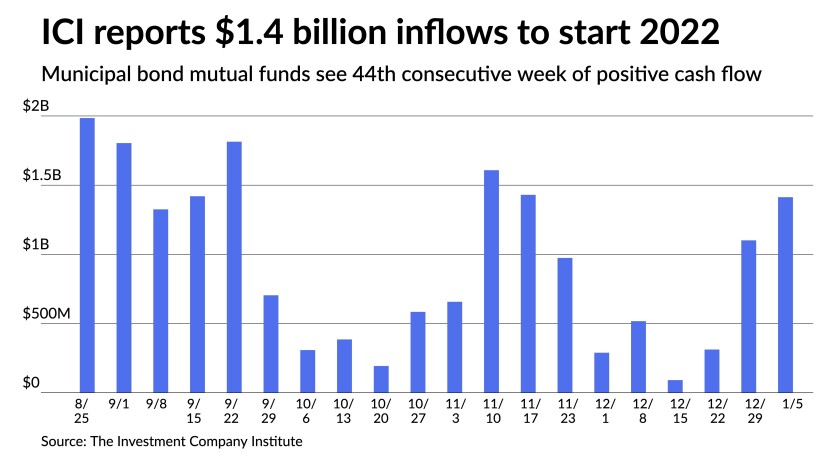 Municipal bonds were largely unchanged Wednesday, the first session in a week in which benchmark yield curves were not cut, while the primary provided more guidance for a supply-starved market. U.S. Treasuries were flat 10-years and in, but softer on the long bond and equities ended in the black.

The Investment Company Institute reported $1.413 billion of inflows into municipal bond mutual funds in the week ending Jan. 5, up from $1.101 billion in the previous week.

It marked the 44th straight week of positive flows into the long-term funds. Exchange-traded funds saw inflows at $268 million after $588 million of inflows the previous week.

He said the sector has been repricing itself slowly — and perhaps begrudgingly — to keep pace with the movements in Treasuries.

“The yield increases have been more a function of housekeeping than they are weakness,” he said. “Weakness would follow selling, and there’s still minimal selling pressure because there just aren’t enough bonds available for people to own. So things that are scarce are valuable and rarely sold.”
Supply is beginning to roll in and the primary action on Wednesday providing more direction.

NYS, NYC to sell $6.9B bonds in Q1
New York State on Wednesday released its calendar of planned bond sales in the first quarter for New York State, New York City and their major public authorities.

Comptroller Thomas P. DiNapoli said the sales of $6.91 billion include $6.28 billion of new money and $630 million of refundings and reofferings.

About $2.97 billion scheduled for sale in March, all of which is new money.

The average seven-day simple yield for the 150 tax-free and municipal money-market funds remained at 0.01%.

Taxable money-fund assets lost $21.2 billion, bringing total net assets to $4.538 trillion in the week ended Jan. 4. The average seven-day simple yield for the 777 taxable reporting funds was steady at 0.01% from a week prior.

Treasuries were flat 10-years and in and weaker by two basis points on the 20- and 30-year while equities ended in the black.

Inflation
The economy and Federal Reserve policy are in transition and policymakers are trying to curb inflation that until recently they termed transitory, analysts said.

“The surge and broadening of inflation has been a red flag for the Federal Reserve,” said Grant Thornton Chief Economist Diane Swonk. “They have pivoted from being patient to panicking on inflation in record time.” She expects a March liftoff and balance sheet reduction “soon after” despite the impact of the Omicron variant.

Another change, Swonk said, is variants are now viewed by policymakers as inflationary, not “disinflationary given the havoc they reap on supply chains.” Yet Omicron is forcing some low-wage earners to tap savings and business to close temporarily as a result of ill workers, she said.

“This is the first time the Fed has chased instead of trying to preempt a nonexistent inflation since the 1980s,” Swonk said. “Brace yourselves.”

Indeed, the consumer price index gained 0.5% in December, while the core rate rose 0.6% in the month, both a tick higher than projected, while CPI jumped 7.0%, as expected, on an annual basis, the fast pace since 1982, and the core climbed 5.5% year-over-year.

“If CPI inflation is still around 7% heading into the March FOMC meeting, as we expect it to be, it will be hard for the Fed to stand by idly,” said Wells Fargo Securities Senior Economist Sarah House.

“Inflation has thus far outpaced nominal wage increases and reduced real wages for broad swathes of the labor force,” said Berenberg Capital Markets Chief Economist for the U.S. Americas and Asia Mickey Levy. “Amid a tight labor market in which the balance of power is shifting toward workers, nominal wages are expected to accelerate partly to catch-up to inflation.”

Investors should prepare for a more bumpy road than they’ve traveled in the past 20 months, he said, but opportunities exist.

“Persistent high inflation rates together with the recent strong labor market data reinforce the hawkish narrative provided by the Fed,” said DWS Group U.S. Economist Christian Scherrmann. He expects liftoff as early as March although Omicron will “dictate the fate of the economy in January and maybe in February.”

Omicron, he said, could prevent progress toward maximum employment, but “it also has the potential to push inflation and therefore inflation expectations up further, possibly implying even more rate hikes down the road than the three to four which are currently anticipated by market participants.”

Inflation will remain elevated into next year, said Jim Smigiel, chief investment officer at SEI. “Many investors would have benefited from having a measure of inflation protection in their portfolios in 2021,” he said. “We always believe some exposure to inflation-sensitive assets is useful and suspect that may be even more so in the year ahead.”

But 2022 will bring volatility to the markets, based on “rising interest rates and uncertainty about the path of the pandemic.”

But, Smigiel doesn’t “see signs of an impending recession on the horizon” and remains optimistic “global growth will re-accelerate as this latest COVID wave fades.”

While inflation has persisted longer than originally expected, it should moderate in the next 12 months, said Nick Hayes, head of fixed income allocation & total return at AXA Investment Managers. “Unfortunately, that fuels probably equal amount of hawkish and dovish rhetoric which probably means that we live in a world of heightened rates volatility for the seeable future.”

While the situation has been termed “persistently transitory,” he said, that phrase “amusingly probably doesn’t add much clarity.”

The question of will the Fed liftoff has been replaced by how many rate hikes will come, Hayes said. “With rate volatility should come risk asset volatility and with it comes opportunities to add risk to create better returns in 2022 than many fixed income investors saw in 2021.”

But not everyone sees inflation continuing into 2023. “The Fed is in a real conundrum,” said Ron Temple, head of U.S. Equities at Lazard Asset Management. “Inflation is likely to recede during the first quarter, but the pressure on households from broader inflation metrics is real and intense. The Fed is walking a tightrope where it might begin tightening just as inflation is falling and economic growth is decelerating.”

Although he supports tapering and liftoff, he sees inflation falling “materially as episodic factors like used cars subside, raising questions on the need for further tapering and additional rate hikes. The Fed should move ahead, but cautiously as the outlook is not as clear as it might appear.”

While inflation should decelerate later in the year, wage pressure provides an upside risk, according to Wilmington Trust economists. “Key components to watch will be disruption related sectors (used and new cars, furniture, apparel) and rent related measures.”

Turning to the composition of the Fed Board, Luke Tilley, chief economist at Wilmington Trust, sees the Powell renomination as providing continuity, but the departure of Vice Chair Richard Clarida removes “one of only two career economists, along with Chris Waller, on the Board.”

The Board will likely tilt “slightly dovish” this year, and with Clarida leaving, it “probably elevates the voices of Waller, the Board staff, and Reserve Bank presidents on the FOMC.”

Modest gains in employment were seen, and prices gained with some deceleration, but the outlook has softened. “Although optimism remained high generally, several districts cited reports from businesses that expectations for growth over the next several months cooled somewhat during the last few weeks,” the report said.